RobotLeg is a leg of a robot that walks with procedural
animations by controlling it with a control rig.

It is a robot leg with control rig.

Two patterns of usage are available.

Characters that move with procedural animation use Blueprints / Procedural /BP_RobotLegComponent.

BP_RobotLegComponent can be added to any slowly moving character.

You can adjust the movement by changing the following variables.
StrideThresholdSqared: The square of the stride per step. The smaller this is, the more the robot moves its legs even with a slight movement.
IKTraceDistance: The length of the trace.
MoveInterpSpeed: The speed at which you move your foot to the desired position.
LegRisingHeight: The height at which the robot raises its legs.
AngleThreshold: Walk when the inner product of the current foot orientation and body orientation falls below this value. The closer it is to 1, the easier it is for the robot to move its legs for rotation.
LegWidth: The width of the landing points of the left and right feet when walking.
MaxPelvisMoveWeight: The weight of the pelvic movement according to the movement of the foot.
PelvisTiltWeight: The weight of the tilt of the pelvis according to the movement of the foot.
VerletWeight: Vibration weight (This is recommended to set to 0 except for a single shot because the vibration becomes intense when switching windows). 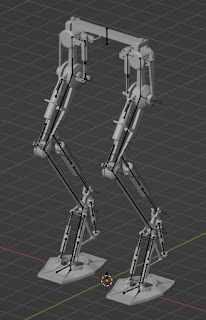